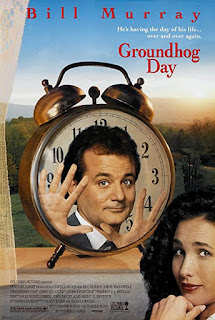 Does anyone remember the 1993 movie Groundhog Day with Bill Murray and Andie McDowell?

"A weatherman finds himself inexplicably living the same day over and over again."

That about sums up my life for the last 140 days, aside from the weatherman part. I work, I cook, I eat, and I sleep. I know what day it is by which work teleconferences I attend. Every few days I check the mailbox to empty the junk mail, and every few weeks I make a brief trip to the grocery store to stock up on essentials. When the weather is decent I walk around the neighborhood, though it's been above 90°F (32°C) for 28 of the last 30 days. Thus far I've managed to avoid getting anything worse than an upset stomach one night from binging on ice cream.

With so many people stuck at home because of the pandemic, many dancers are looking for ways to create home ballet studios. Here are some suggestions for ways to do this. 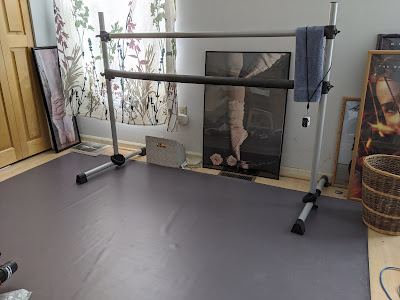 In November I bought new So Danca slippers because I just couldn't deal with the Capezio Hanamis anymore.

Today, as I put my shoes on for my third virtual class, I noticed one of them had developed a tiny hole in the toe. I thought that was kinda fast, as I missed some classes in December and January, and didn't take any classes in March.

During class it felt like the hole had gotten bigger. I was right: 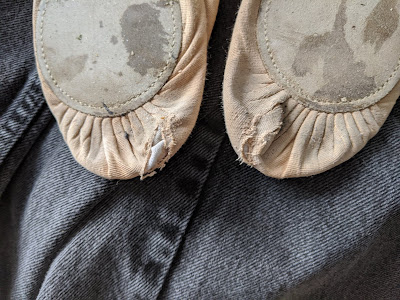 I think I still have the original box these came in, so I'll try to order some online. Until then I think I've found a suitable use for my Hanamis.

The room where I'm doing the virtual classes has a Pergo (a synthetic laminate) floor. My best guess is that there's a slight, sharp ridge between two of the boards, and I'm scraping my toes across it when I do rond de jambes.

I've heard that PVC shower pan liner makes an acceptable floor covering for dancing. I might venture out tomorrow and grab some. I'll post an update next week on how well this works.


I finally cleared enough space to attend one of the many virtual ballet classes being offered all around the world. The one I attended was held over Zoom, and it worked pretty well.

The USA just took over the top ranking for the number of confirmed COVID-19 cases in the world. That's an "honor" I think we could and should have done without.